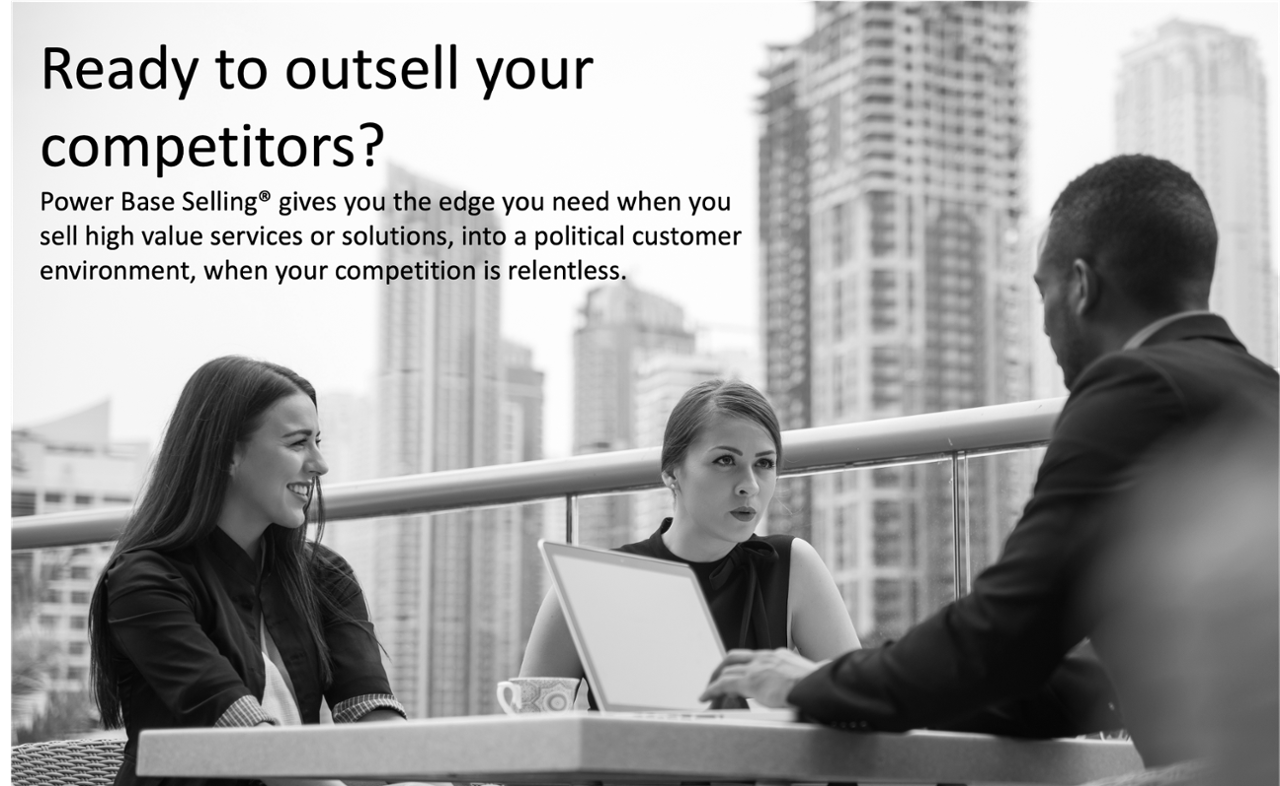 "Power Base Selling®  is an excellent course that provides a structure and a reality check, excellent delivery too!"  David Smith, Head of Central Sales, Tribal Group


What is Power Base Selling®?

Power Base Selling® is a sales methodology developed by industry thought leader and renowned sales expert, Jim Holden, that centers on finding the Fox.

How does Power Base Selling® differ from other selling methods?

The program focuses on articulating value and proving a ROI, navigating the organization - creating and executing a political plan where you "find the fox" and developing a strategy to defeat the competition.  We assume that you have all the basic selling skills covered already!

What is the premise for the methodology.

There are many occasions when salespeople even with the best product [service or solution], at the keenest price, backed by the strongest brand, still lost the sale.  Why?  Because they were outsold.

Why do "Power Base® Sellers" out sell their competitors?

The identify critical information early - about the Politics and the Competition - they build and execute Winning Sales Plans® and they find the fox, building supporters and allies in the process.  They focus on how they sell not what they sell.

Why is Power Base Selling® sometimes called Fox Selling?

Jim Holden found that frequently sales people get inadvertently aligned with the wrong people,  caught up on the wrong side of a power conflict or somehow their competitor wrong footed them by getting to the right people.  One of Jim's many breakthroughs was understanding the difference between influence and authority and how decisions really got made - influence outweighed authority.  The really influential people Jim labeled as The Fox.
​​​​

How do you know Power Base Selling® works?

Simple - empirical evidence from over 28,000 participants and working on over 50,000 deals, furthermore 50, - What Jim Holden did was to recognize where salespeople went wrong, as well as where they did things correctly.  Based on much empirical evidence Jim developed a methodology and wrote several books to address the challenges and sell effectively into the Power Base and find the Fox.

What is a Power Base®?

The Power Base, and there can be several different types of Power Base, comprises the people who have political strength derived from influence not just authority, the operate together (formerly and informally) to make and influence decisions. At the heart of the Power Base, the center of influence sits the Fox.

Why is Power Base Selling® different?

Power Base Selling® is understanding this political structure, the motivations of the Power Base members and selling skillfully into this environment so the decision to purchase gets made in your favor because you have won over The Fox.

What do most sales people rely on the win?

They focus on having (or the perception they have) the best product, price and brand - in the words they focus on what they sell not how they sell.

What is the eFox® Winning Sales Plan?

It is the Holden online / SaaS opportunity management tool - is captures your value messaging, political plan, compete strategy, tracks the status of the deal and helps you identify missing critical information.  Over the years the Winning Sales Plan has been available id various electronic and paper guises - "the Value Guide®", "The Winning Sales Plan®", the "Fox Guide®".